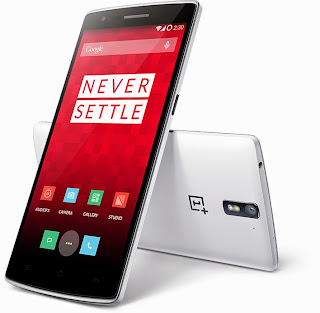 OnePlus has a motto, "Never Settle", that is a represtation of the company's goal to build a perfect smartphone that everyone can purchase it for less than the name brands are selling for off contract. If the LG G3, Google Nexus 5 or the Samsung Galaxy S5 (forget Apple, they are always outdated) were priced at $299 to buy outright, off contract and unlocked, would you consider purchasing it instead of signing a 2 year contract or paying $29 a month for 18 - 24 months? I would. Unfortunately the off contract price of these high end phones are the cost of a decent PC these days. OnePlus is changing that and is offering the same technology for half the price of it's competitors. Their first phone, called the One for obvious reasons, is a self proclaimed 2014's Flagship Killer. Believe me when I say this, it is!

The OnePlus One is a smartphone developed by a startup created by ex-workers of Oppo. If you want a high-end phone on a budget, look no further.

Hardware
The One has a 5.5-inch 1080p IPS LCD panel with a pixel density of 401 ppi. It is 1.7mm taller and 0.6mm thicker than the Samsung Galaxy Note 3. It is, however, roughly four millimeters narrower and six grams lighter than Samsung's 5.7-inch flagship. It features an arched back with blunt edges to naturally fit in your hand when gripped. It may not be quite as crisp or bright as others, but most won't even notice the difference. Since it uses an IPS panel, the One's viewing angles are way better than the GS5. The firmware lets you customize the amount of color saturation, intensity and contrast as well. The display is protected by the Gorilla Glass 3 protective glass. The front-facing camera is 5-megapixels and the rear camera is 13 megapixels with a dual-LED flash. There are three capacitive buttons at the bottom, which can be turned off to use the virtual soft keys instead. The volume rocker and micro-SIM (however, now they are shipping with an added regular sized SIM card carrier as well) are on the left, while the power button is on the right. I would have preferred the power button be on top with the 3.5mm headphone jack since for some reason I am always hitting it while putting it in my pocket or even moving around. The bottom of the phone has twin speakers and a micro-USB slot. There is no microSD storage slot, but it is not that big of a deal with so many choices for cloud storage. If it is an issue the $299 16 GB version can be upgraded by purchasing the 64 GB drive version for $349.00. This usually costs $200 more with other smartphones.

The back cover has 5 different variations with different colors and/or textures. To switch it easily will come with practice, since you have to remove the SIM tray and then pry off the back cover. The insides were not made to be replaced easily, hence the time it takes to get the cover off. The 3,100mAH battery is not removeable.

If you feel that you need something with wireless charging, a microSD slot, waterproof design, aluminum build or a removable battery, this may not be the perfect phone for you. However, this is a great phone for being their first and for $299.00. I myself am sporting the $349 64 GB Sandstone Black variant with a the Blue Flip Cover.

OnePlus is a partner of one of the most popular third-party firmware makers, CyanogenMod. Who/What is Cyanogenmod? Well it is a custom firmware/software experience based on the AOSP (Android Open Source Project) which gives the user more freedom to mess around with themes, icons, and settings. They call their version Bacon for the OnePlus One. It comes with Android 4.4.2 (cyanogenmod 11s) and has been currently upgraded to 4.4.4. Since it is natively embedded and created for the One, the experience of this Modded AOSP is better than other devices they support. The optimizations are better since they were involved in the development of the phone. The overall flaw of being part of the AOSP community, which in the end is it's best feature, is the lack of showboating it's possibilities once turned on. In the beginning it is a bland Android OS. However, it's completely customizable, and it's fantastic. It leaves the imagination up to you by leaving it bland (or the choice of Cyanogenmod's theme at setup). The potential is there and has a great modding community with an overload of themes, wallpapers, icons, boot animations, fonts, ringtones, status bar, notification sounds, etc. to choose from already.

Overall Thoughts
For any user the phone is a steal at the price point OnePlus is offering it at. I personally can't wait for the OnePlus Two to be announced for 2015. I used to be an Apple iPhone user from the 2G to the 3G and finally to the 4. That was my last one I had bought. I temporarily used my wifes iPhone 5 while she played around with the Samsung Galaxy S4 (which she ended up not liking and we switched). I loved the S4's IR for using it as a remote control, but that is the only thing I really miss from it.

What are your thoughts and/or comments? Remember to always Geek Out with Your Tech Out!

LeRoy Otterson aka The Geekmeleon
at 7:51 AM
Email ThisBlogThis!Share to TwitterShare to Facebook
Labels: Android, ASOP, Cyanogenmod, Hardware, OnePlus, Reviews, Smartphones, Technology, What do you think?