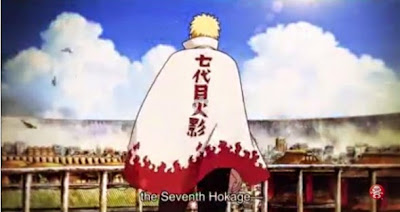 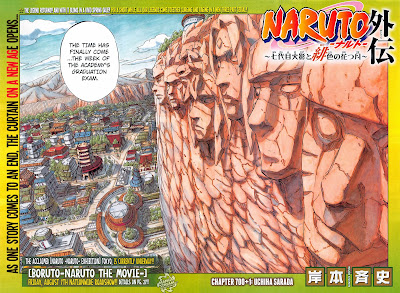 The 701st chapter of the Naruto series, but the 1st chapter of the story arc Naruto Gaiden: The Seventh Hokage and The Scarlet Spring Month , is out! I technically call it the second chapter since the first one was half of chapter 700. This chapter is about Sarada Uchiha overall and her jealousy towards her friends relationships with their fathers. It seems that her father is never around much. In the end she questions her parents relationship and even if Sakura is really her mother.

BACK TO THE WEEKLY ANTICIPATION OF WAITING ANXIOUSLY FOR THE NEXT CHAPTER!

The manga starts off with a few children of the previous generation Naruto series in class with the Ninja Exams about to start and. From the start we have Boruto Uzumaki (the Son of Naruto and Hinata) and Sarada Uchiha (the Daughter of Sasuke Uchiha and Sakura Haruno). In the second page we see Shikadai Nara (Son of Shikamaru Nara and Temari), Chōchō Akimichi (Daughter of Chōji Akimichi and Karui from Team Samui) and Inojin Yamanaka (Son of Sai and Ino Yamanaka). I'm taking a guess, since the name has not been revealed, but I am thinking the light blue haired kid talking to Boruto is Gara's son. It is a long shot considering why would the son of Gara be going to school in the Hidden Leaf anyways.

The next two pages we see Sarada listening to Chocho talk about training, the exams and dealing with her father. Chocho decides to go get some Anmitsu, but is rejected by Sadara advising her to just go and train with her dad instead. Chocho thinks Sarada was being mean thinking she needed the training and lashes out at the all might Uchihas who make it seem easy. In turns out Sarada was really just saying at least you get to hang out with your dad. Choji shows up and Sarada exists.

Next we get a hint at Boruto's abilities. It opens with a full page shot of Boruto coming down from a kick with Naruto blocking it all in mid air. As the page turns, Boruto disappears and Naruto is fooled by his clone. This gets Naruto going and starts his Multiple Shadow Clones technique. Sai is training with his son in the background and mentions that Naruto is acting petty for using his Multiple Shadow Clone technique (basically over doing it and showing off). Sadara is then in the spot where Boruto was and Naruto lost sight of him while talking to Sai. As Boruto hides inside a triangle shaped standing sign, Naruto appears and questions Sarada if she knew where Boruto went. She misleads Naruto and tells him Boruto went a different way. As Naruto leaves, Boruto thanks Sarada and it turns out Boruto and Naruto have been playing Hide-And-Seek this whole time. This makes Sarada even more jealous since the Hokage even has time to play with his son. Skimaru shows up and tells Boruto if Naruto were to use his Sennin Mode he would find Boruto instantly. Boruto knows that and since there wouldn't be a record for Boruto to break every time if Naruto were serious. Even Skikadai is giving Boruto a hard time about playing with the Hokage who has more important things to do. It turns out Naruto is just using a clone of his own to play with his son. As Boruto is about to leave, he realizes he can't move. Shikamaru has used his Shadow Binding ability to stop Boruto from playing and tells Shikadai to go get Naruto's clone.

The last set of pages are Sarada arriving at home and talking to her mother about dad. She asked her a question if Sasuke wore glasses and Sakura is unsure. Sarada is coming down on Sakura about their so called relationship and whether or not it is even real. Sakura quickly loses her temper and smashes the ground beneath her causing the rest of the house to collapse. Seems like she also learned the 5th Hokage's anger from their time training. Turns out Sakura and Sarada both seem to be sad about Sasuke not being home as much. As Sarada later goes through the house she grabs the picture of her dad and pulls it out. It reveals Sasukes team and to her surprise there is a girl with glasses! It ends with Sarada thinking about how much she resembles this girl and Sasuke returning to the village.


at 8:51 AM
Email ThisBlogThis!Share to TwitterShare to Facebook
Labels: Anime, Boruto, Manga, Naruto