Home » Movies » Reviews » What do you think? » Review: My Thoughts On The Teenage Mutant Ninja Turtles (2014) Movie

Review: My Thoughts On The Teenage Mutant Ninja Turtles (2014) Movie 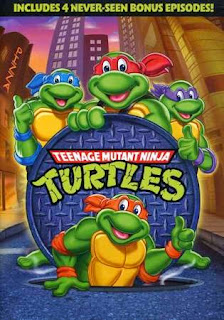 As far back as I can remember the four mutant turtles, who were raised and trained in Ninjutsu by a mutated rat, have stayed at the very top of my memories today. Everytime I order a pizza, I want to order it with the most outrageous and ridiculous toppings known to man. When I see a skateboard, I want to jump on it and yell Cowabunga. When I watch the news I think of April O'Neil wearing her yellow tights and jacket. If there is a rat on the loose..well actually I will call pest control about it. You get my drift. I even remember how they had an PSA (Public Safety Announcement for those who are too young to know what PSA meant) about how leaving the water running while brushing your teeth can waste up to 5 gallons of water. Those turtles are the ones I remember.

Seeing how Michael Bay has his Transformers producing hands in this movie, I almost cried knowing how the new movie will be possibly ruined by him. The trailer, at first glance, seemed like I was watching the Transformers as turtles. The turtles are oversized and bulky by comparison to April O'Neil (actress Megan Fox). The scene in which Donatello swings Micheangelo into a cannonball to smash a Hummer shows just how BIG these turtles are. A hummer should be able to fit the turtles since their vehicle of transportation used to be a Volkswagon Van that all four of the turtles, Casey Jones and even April all crammed into. They even stole the subway train scene from the original costumed live action movies I thought were never going to be topped. I wish they would have stuck with the first movies characteristics and costumes for the next two that they did back in the late 80's and early 90's. They were kinda dark and close to being realistic. The second movie turned more cartoonish and anti-violent. Forget about the third one.

I do like the fact that actor William Fichtner was cast as The Shredder. His voice and acting will make this Shredder the best one to date. It does go against the original Shredder being Japanese, but this wouldn't be the first time someone has changed the background of The Shredder. One of the storylines of the recent cartoons, prior to the newly animated one, The Shredder and Krang were one person. The Shredder was the robotic body of Krang with a more realistic human robot than compared to the original. This was a story line that had the Krang alien race blend in more with humans. 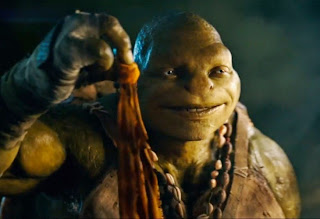 The best part of the Official Trailer #1 was how normal Micheangelo thinks he is when getting the jump on April. Micheangelo tries to calm her down by advising her he is wearing just a mask and starts taking off his bandana instead, thinking that was going to make it better for April.

I never go into watching a remake thinking about the past comics, movies or tv shows. The point is the writers are putting their take of the story and describing it the best they can. I also never go in with high expectations. This way I am never disappointed either. Overall, I will give this movie a chance and watch it. I just may do it as a weekend or even weekday early showing.

LeRoy Otterson
at 7:34 AM
Email ThisBlogThis!Share to TwitterShare to Facebook
Labels: Movies, Reviews, What do you think?