Years ago as a child I played a game called Wolfenstein 3D on a Greyscale IBM laptop.  The premise was simple run through hallways decorated in Nazi Flags and mow down every single last Nazi scum you could find.  Years later other games claiming to be Wolfenstein came around I played them as well.  Some where entertaining but not the same.  Then this year Wolfenstein: The New Order was released and finally I have a gaming experience that is 100% Wolfenstein.

Walking down a dark hallway, you can hear the faint sound of Nazi laughter.  As you proceed down this hallway armed with only your combat knife which you earlier pride from a dead Nazi's hand, come upon what looks like a restroom.  You enter the restroom to find a Nazi relieving himself in a toilet do you walk away and risk him finishing him and you.  Nope you sneak up right behind him quietly. The prompt pops up on the screen to take him down.  You press X on your controller and before you know it BAM!  Your character turns the Nazi around, punches him square in the face, plungs his head in the toilet he was just peeing in, followed by you slowing inserting your combat knife in the back of his skull as the gurgles from the bubbles in the urinated water explode from the surface. You stand up brush off your knife and flush the toilet.  You are BJ Blacowitz a American Soldier in WW2, 'MERICA!  Although you just had a small victory over that last guy.  The Nazi's are winning the war.  Your goal which is the same in the previous games is to find and kill General Deathshead.  The creator of many Nazi-mechanical horrors which are set in your path.  "SPOILER ALERT"  Skip ahead twenty years to 1960 the Nazi are now ruling the world.  America is no more there is only Nazi rule across the entire world as well as the moon.

This game is also rather simple to play just like it's previous installments.  Well at least in idea.  You can duel wield Pistols, Assault Rifles, and Shotguns.  You use the 90's FPS premise that you are collecting armor shards and have 100 hp.  When your armor and hp (Hit Points) are gone your dead.  But when I played it on normal and found that my playing FPS's of today have not prepared me for the type of game anymore.  It was hard, I died a lot.  But it didn't matter because I wanted to continue.  The story is fun to watch unfold and you truly feel like your making a difference.  It has a Quentin Tarentino feel to it.  The characters where likable and you cared for them.  BJ is a badass plain and simple. 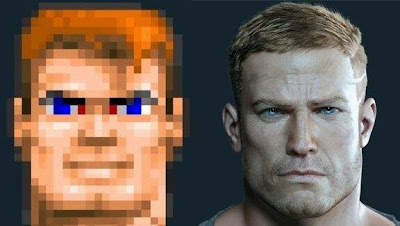 The Graphics are incredible.  There is a lot of detail ,that gave even my Batcomputer a run for it's money, at max settings. It's gory, explosive and funny.  Id has hit a classic in this game I just hope people out there give it a chance and get away from the same old thing which believe it or not this is not.  Give it a chance don't get frustrated by it's difficulty Just turn it down if your a Sally.  What's old is new again!  Makes me think why couldn't Duke Nukem Forever have been like this.  That being said I look forward to the Doom Beta ultimately the new Doom game.  Good things are going to be coming out of the Id Studios again and it's good to have them back.

Buy it!  This is great game and they deserve your money.