M.O.B.A. (which stands for Multiplayer Online Battle Arena)  is a type of game that's sweeping the globe in popularity with League of Legends being the number one played MOBA and on top of that, its also the most watched game on twitch.  So just what is up with all of the hype?
A MOBA in a nutshell is just a game made up off 2 teams with the goal of taking out each others main Inhibitor in their base.  Now, usually a MOBA is comprised 10 players (5v5) and 3 lanes and a jungle and within these lanes are turrets that you have to destroy to get to the enemy base and destroy their inhibitor and within the jungle, they're are enemy camps that you can destroy to help you even further by netting you extra gold to spend in the item shop back at your base or even net you a mana buff (blue buff) and also a damage buff (red buff).  Also in the jungle lies 2 major bosses that take the whole team to tackle and when you kill them you're whole team is rewarded with either a massive lump sum of gold or a massive damage buff. 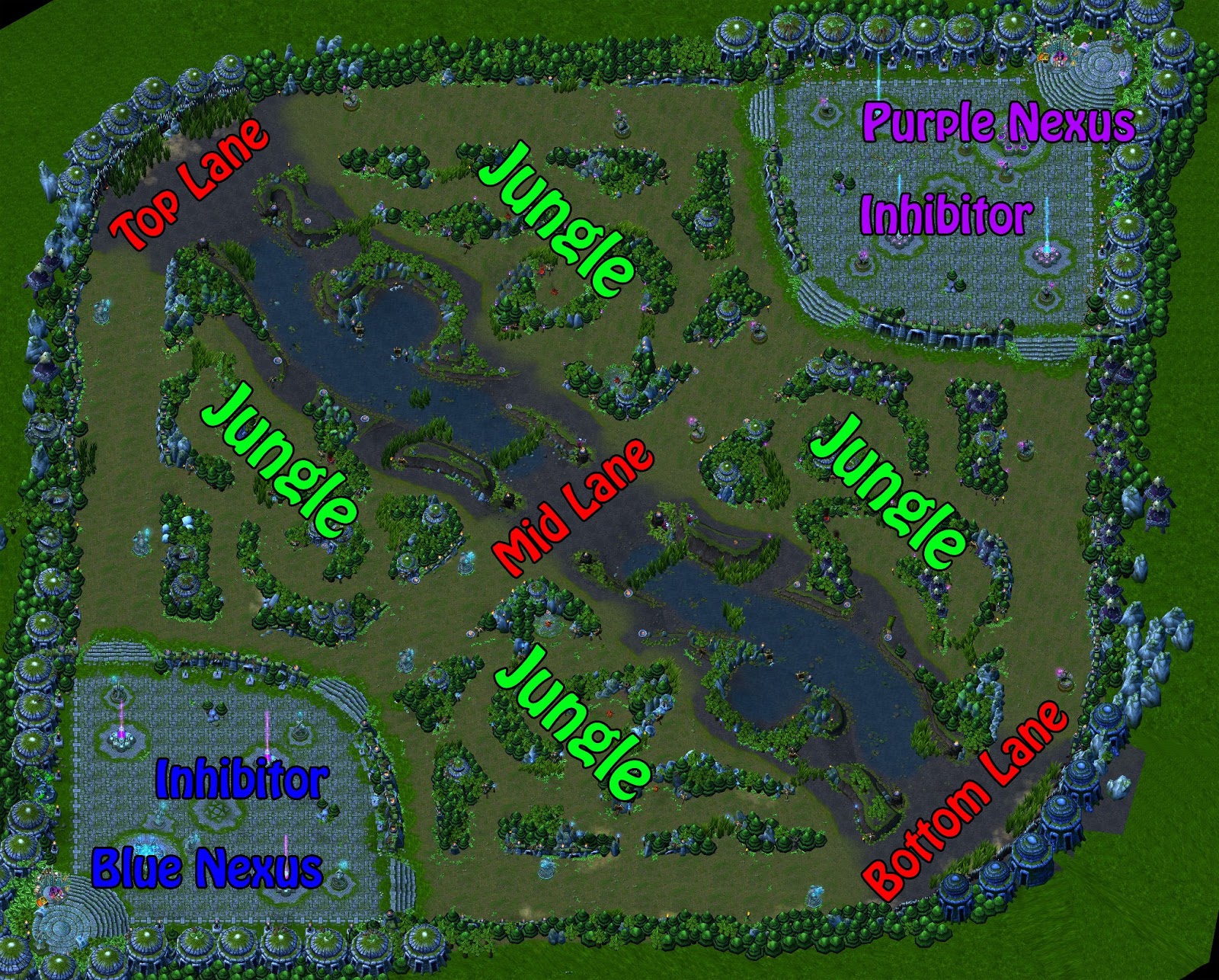 Starting a game requires you to pick a champion and each champion has its own role whether its a mage, assassin, marksman, tank, fighter or a jungler.  this step of the game is called champion select and you want to communicate with your team to make sure that everyone isn't picking the same role and after you pick a champion, you claim what lane you want to run and then you stick with that lane. for ex.  Top laners stay top, bottom laners stay bot and the jungler stays in the jungle killing off camps to help buff the team all the while jumping from lane to lane to help push their lane by sneaking in behind the enemy (also known as ganking).

When the game begins, you start at your base and you have an item shop to purchase things to help you get more powerful as the game progresses and the way you buy items is by earning gold and the way you earn gold is by killing players, enemy camps in the jungle and by farming minions.  Minions are... well minions and each team has them and they are used to help push each lane and they spawn from your base's inhibitors and when they are destroyed, the enemy minions get more powerful and become super minions and when killed they net you a larger sum of gold.  minions net gold, gold buys items, and items make you stronger.  so killing minions early on is a good thing so you can get a head start of the enemy team but be warned, they are out to do the same thing you are.

Each champion has 5 skills: 1 passive and 4 ability skills that are mapped (usually) to Q.W.E.R. with R being your "Ultimate" and dealing substantial damage.  When you kill enemies and minions, you gain a level and with each level you're giving a chance to upgrade 1 skill per level while unlocking your Ultimate (R) at level 6.  These abilities range from anything from a slow down ability, healing, damage, and armor,  Each champion has their own set of unique abilities and right now on League of Legends, they're are currently around 120 champions sooooo yeah that's a lot of different possibilities.  my advice (and this is coming from a somewhat new player) pick a champion and stick to that champion for a while and when you get used to that champion, you can start using other champions in the same category until you can slowly and i mean slowly get the hang of the other champions.

Now MOBA's are usually free 2 play so you have no excuse to not at least give it a shot.  This isnt something that you're going to just be able to pick up right away and dominate as it has a pretty steep learning curve with the champions and what items to buy with that champion and even how to play that champion and also counter other champions.  so get out there and play a MOBA today.  here's a LIST of the best MOBAS (courtesy of MMOBOMB)